Home » Blog » Ovulation symptoms: how can I tell when I’m ovulating? 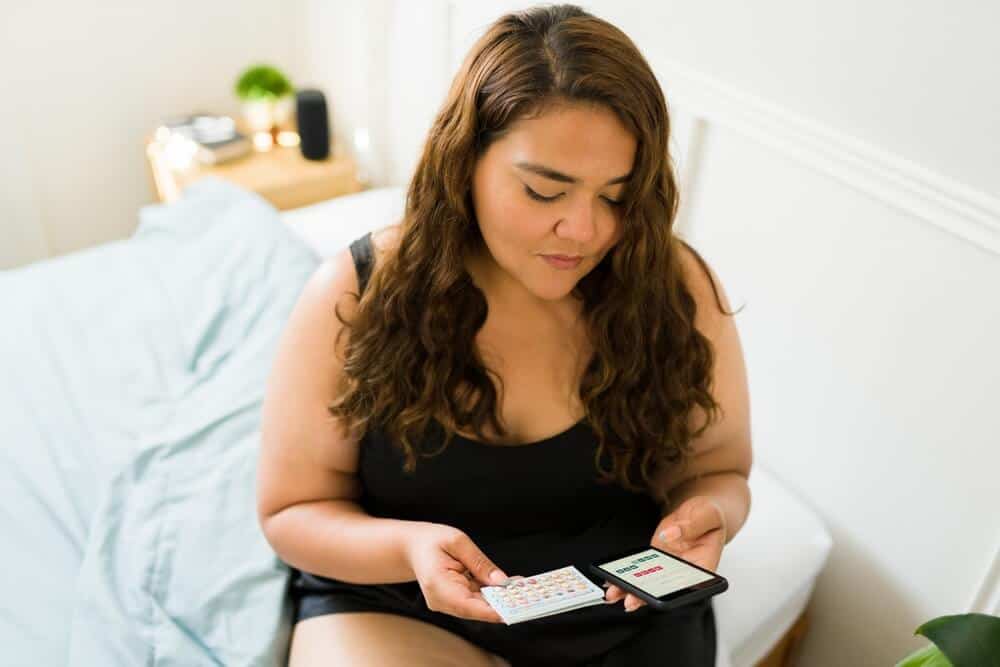 Ovulation is the point in your menstrual cycle when a mature egg is released from an ovarian follicle in the ovary, in preparation for fertilisation. The egg is also known as an oocyte, ovum or female gamete. FOllowing ovulation, the egg moves down one of the two fallopian tubes that connect your ovaries to your uterus, where it may be fertilised if it makes contact with a sperm.

Sperm can live up to five days, so it helps to know when you’re ovulating to plan the best time to have sex for a chance of conceiving. If fertilisation doesn’t happen within 12-24 hours, then the egg degenerates.

Women are born with millions of eggs, but each month many eggs do not reach maturity and only about 300-400 mature eggs are released through ovulation, during a woman’s life, usually just one egg each month. On rare occasions it can be more, which could result in ‘multiple pregnancy’.

When does ovulation take place?

Ovulation takes place once a month and lasts for about 24 hours.  Ovulation usually happens about 14 days before your next period. However, the length of a cycle can vary from woman to woman. This is why it helps to get to become familiar with your body’s own cycle to help better understand when you ovulate.

Some women may find that their ovulation is irregular or doesn’t occur. There are many reasons for this. Lifestyle factors, such as being overweight or underweight or being under stress, can affect if/when ovulation takes place. Polycystic ovary syndrome (PCOS), amongst other conditions, can also affect ovulation. And certain diseases and medication (including chemotherapy and antidepressants) can also influence and prevent ovulation from happening.

What are the physical symptoms of ovulation?

If you learn to look out for the physical symptoms of ovulation, then you’ll be able to time when you have sex to increase your chances of becoming pregnant. It can also help you to get a general sense of what is normal for your body so you can spot anything abnormal in future. If you’re tracking when you ovulate for fertility purposes, remember that not everyone experiences physical symptoms. The symptoms listed below are just some of the typical physical symptoms you can look out for.

Basal body temperature (BBT) is the lowest resting body temperature.  This is best taken first thing when you wake up in the morning.  A change in progesterone level will cause your BBT to rise and stay elevated during ovulation. As so many things determine when you ovulate, relying on calendar dates is tricky. So measuring your BBT to find out when you ovulate, and therefore when your fertile window is, will give you a clearer picture.

As you get closer to ovulation, your cervical mucus becomes clear and stretchy (stretch it between your thumb and your finger to test) or exceptionally wet and slippery. It can look a bit like egg white. This means you are likely in your fertile phase. The change in cervical mucus consistency is due to your body producing more oestrogen. This is nature’s way of helping the sperm to swim to the egg released when you ovulate.

A surge in hormones before and after ovulation can cause tenderness and soreness in the breasts. Some women can feel it before ovulation and some women after ovulation. Others don’t feel any sensitivity at all.

You also may find that your breasts feel fuller and slightly larger when you’re ovulating; this is due to an increase in blood flow and water retention.

Some women feel ovulation occurring as a mild ache, cramp or pain in one side of the lower abdomen where the ovary is releasing the egg. This is called ‘mittelschmerz’, which is German for ‘middle pain’ as ovulation occurs roughly in the middle of a menstrual cycle. The pain can last a few minutes or hours. In addition to this pain or discomfort, you may experience nausea or some vaginal bleeding. It’s usually nothing to worry about, but if the pain is too much, then make an appointment with your GP to rule out an ovarian cyst or endometriosis.

Ovulation bleeding is also perfectly normal. It can happen when the follicle that surrounds and protects the developing egg ruptures, resulting in a small amount of bleeding. The blood can be dark red to brown in colour as the blood isn’t fresh. However, if the bleeding continues, make sure that you visit your GP to make sure all is well (persistent bleeding can be a sign of an ectopic pregnancy or an infection).

Can you track ovulation?

There are ways of tracking ovulation so you know exactly when to have sex to increase your chances of pregnancy. Let’s run through them below:

If you have regular menstrual cycles (between 25 and 35 days), ovulation will likely happen around 14 days before your period. Simply note down when you have any of the physical symptoms above and you might see a pattern emerge after three months or more.

You can buy ovulation predictor kits in your local pharmacy. They often look a bit like pregnancy tests and they work in a similar way too (peeing on a stick). You can use them to measure the levels of luteinizing hormone (LH) in your urine, looking for the ‘LH surge’ that preceeds ovulation. The LH surge starts the process of final maturation of the egg, but follicular rupture happens about a day to a day and a half following the LH surge. Once you detect the LH surge it is sensible to have sex that day and the following days in order to ensure the egg has a good opportunity to meet a sperm.  To save you buying multiple boxes of tests, you need to chart your cycle before you start using them so you know when to start testing.

Fertility monitors can be expensive, but they provide more information, measuring LH and oestrogen levels to let you know when your two best fertile days are (along with the five days leading up to them).

Take your temperature with a digital thermometer (designed for BBT) before you get out of bed in the morning. At the start of your cycle, your BBT is around 97.2 and 97.6 degrees Fahrenheit. Near ovulation, there’s a slight decrease in basal body temperature, followed by a sharp increase (about 0.4 to 1.0 degrees), just after ovulation. Take your temperature at the same time each day and record it on a chart.  Again, once you detect that ovulation is likely to be occurring, that and the following couple of days  is the optimum time to have sex.

What if I’m not ovulating?

Irregular periods are a sign that you might be suffering from irregular (oligo-ovulation) or no ovulation (anovulation). If your ovulation tests are coming back negative or your periods are absent/vary significantly in time we advise that you speak to your GP as this is a sign you may not be ovulating.

One reason women may struggle with ovulation is PCOS. PCOS is believed to affect 1 in 10 women in the UK and often causes irregular or absent ovulation, even if you have regular periods. If you are trying for a baby and have been diagnosed or suspect you might have PCOS we suggest you speak to your GP as soon as possible. You can learn more about PCOS and fertility here.

If you have PCOS why not try Inofolic Alpha. Clinically proven to restore ovulation in 95% of PCOS women and recommended by fertility specialists across the UK.