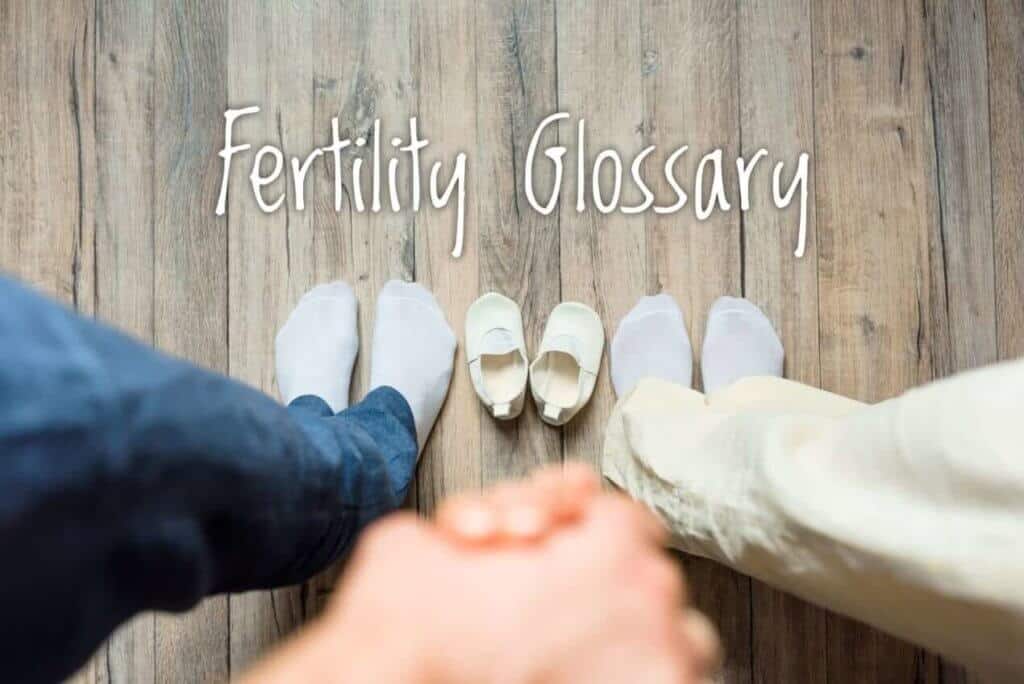 The experts at Fertility Family have compiled this glossary of fertility terminology and abbreviations for 2021.

Adoption The legal process involving a couple becoming the legal parents of a child.

Antral Follicles Smaller follicles that appear as small fluid-filled sacs which may develop further as a result of FSH stimulation.

Assisted Hatching Process in IVF where a lasers or chemical agent is used to thin or make a small hole in the shell surrounding the embryo (the zona) to facilitate hatching.

Assisted Reproductive Technology (ART) Procedures that take place in the laboratory that help unite an egg and sperm outside the body.

Asthenozoospermia Sperm with poor motility, meaning that the sperm do not swim properly.

Antisperm Antibodies Sticky proteins on sperm that cause immobilisation.

Azoospermia When the ejaculate does not contain any sperm.

Blastocyst  The early stage of an embryo that is 4-5 days old and is a hollow ball of cells whose wall is comprised of a single layer of cells; the blastocyst is the liquid-filled sphere that implants in the wall of the uterus during implantation.

Blastocyst Transfer An embryo that has reached five days of development and is transferred into the uterus.

Cervix The opening to the uterus.

Cervical Mucus A fluid that helps the sperm survive and swim into the endometrial cavity.

Clomiphene Citrate A fertility drug used to stimulate ovulation that may result in multiple births.

Clomiphene Challenge Test An assessment that can determine the egg reserves in the ovaries.

Corpus Luteum A ruptured follicle. The corpus luteum releases Oestrogen and progesterone. Progesterone continues to be released if fertilisation has occurred. If pregnancy does not occur, the Corpus Luteum stops producing Progesterone and the female will have a menstrual bleed.

Cryopreservation The process of preserving biological entities by freezing them, commonly used for embryos or sperm. Cryopreservation of oocytes is a relatively more recent development.

Ectopic Pregnancy A pregnancy in which a fertilised egg implants itself and begins to develop outside the uterus. This usually happens in one of the fallopian tubes.

Egg Collection A procedure performed to collect the eggs produced from an IVF/ICSI cycle. This can be performed under sedation or a General Anaesthetic.

Egg Donation A donation of eggs from one woman to another for use in IVF/ICSI treatment .

Electro-ejaculation The use of electrical stimulation to aid production of a semen sample in impotent or paralysed men.

Embryo An organism in its early development stage. These formative stages of development begin from fertilisation and continue through to around 8 weeks later when tissues and organs develop.

Embryo transfer A procedure following IVF/ICSI in which the embryos are replaced back into the uterus.

Endometriosis A condition in which the lining of the uterus, called the endometrium, grows outside of the uterine cavity. Often, this tissue is found in the pelvic cavity attached to the ovary or fallopian tubes. It can be a cause of infertility in women.

Epididymis Coiled tubing outside the testicles which store sperm.

Estradiol A type of Oestrogen (a hormone) secreted by the ovaries.

Fallopian Tubes Tubes connected to the uterus and positioned near the ovaries. It is here that fertilisation of the egg and sperm occurs.

Fertilisation Sperm penetrating the egg which can lead to pregnancy.

Follicle Stimulating Hormone (FSH) A hormone produced by the pituitary gland that stimulates the growth of the egg-containing follicles in the ovary. In males it contributes to the production of sperm.

Follicles A fluid filled sac in the ovary in which an egg grows and develops. Although the egg is microscopic, follicles can be visualised by ultrasound.

Follicular Tracking Scanning a woman using ultrasound during a stimulated or natural cycle to observe the number and growth of follicles.

Gonadotropins: Gonadotropin Releasing Hormone (GnRH) Produced by the Hypothalamus, it enables the production of LH and FSH.

Human Chorionic Gonadotropin (HCG) A hormone that is produced by the body in the early stages of pregnancy. It enables the corpus luteum to continue producing Progesterone. In assisted conception HCG is used about 36 hours prior to egg retrieval to mature the eggs ready for the egg collection procedure.

Hydrosalpinx Fluid in the fallopian tube.

Hypothalamus A specialised part of the brain that orchestrates the body’s hormonal changes.

Hypospadias Congenital abnormality, affecting male offspring, in which the opening of the urethra is misplaced or malformed.

Hysteo-Salpingpgram (HSG) Procedure which uses X-rays to check the strucure and patency of the uterus and fallopian tubes.

Hysteroscopy A procedure in which the uterine cavity is visualised by a surgeon. Can help in the diagnosis of fibroids, polyps and anatomical anomalies.

Implantation For a pregnancy to continue developing the embryo needs to implant into the lining of the womb, the endometrium.

In Vitro Fertilisation (IVF) A procedure that involves removing eggs from a woman’s ovaries and fertilising them in the laboratory, outside the body. The resulting embryos are then replaced back into the woman’s womb through the cervix.

Intrauterine Insemination (IUI) A procedure in which sperm is washed and prepared and then passed directly into the uterus via a fine catheter to enhance the chances of fertilisation.

Klinefelter’s Syndrome A genetic condition in which men have an extra X chromosome.

Laparoscopy A low-risk surgical procedure in which the surgeon examines the internal structure of the pelvis (including ovaries, fallopian tubes and uterus) by making a small incision under the belly button and inserting a small camera called a laparoscope.

Luteinizing Hormone (LH) A hormone which is produced by the pituitary gland. In females it is essential for final egg maturation and, along with FSH, the production of Oestrogen. In males it is necessary for the process of sperm production and testosterone secretion.

Menstrual Cycle Normally a 28 day cycle in which ovulation occurs around day 14 and if fertilisation does not occur, results in a bleed around day 28.

Miscarriage Spontaneous loss of a viable embryo or fetus in the womb.

Motile Forms Sperm with a good ability to swim.

Oestrogen A hormone that aids the thickening of the endometrium lining. It is also produced in small quantities in the male.

Oligozoospermia Low numbers of sperm in the ejaculate.

Oligo-asthenoteratozoospermia (OATS) Low numbers, reduced motility and abnormality of the sperm shape in the ejaculated sample.

Open Approach (Abdominal Myomectomy) A surgical procedure in which only fibroids, but not the uterus, are removed. This preserves childbearing potential. Myomectomy can be performed in different ways depending on the location of fibroids within the uterus. The most common approach is abdominal myomectomy, which allows the surgeon to directly visualise the uterus and fibroids through an abdominal incision.

Ovarian Cysts Sacs filled with fluid or semisolid material that develops on or within the ovary during the time of ovulation. Most cysts are benign and disappear spontaneously without treatment.

Ovarian Hyperstimulation Syndrome (OHSS) A condition due to excessive response of the ovaries to stimulation drugs, in which the ovaries enlarge and there may be nausea, abdominal swelling and shortness of breath. This develops after the trigger injection and you should always report it to the clinic or an emergency doctor.

Ovary The female reproductive organs that produce eggs and oestrogen on a monthly basis under hormonal influence from the pituitary gland.

Ovarian Drilling Surgical procedure offered to women with PCOS. Small holes are drilled into the ovary to reduce the number of cysts present in an attempt to regulate the menstrual cycle and aid ovulation and conception.

Ovulation The release of the egg (ovum) from the ovarian follicle.

Pelvic Adhesions Abnormal bands of scar tissue that form in the pelvis and cause organs to stick or bind to one another.

PGD Pre-implantation Genetic Diagnosis. The analysis of a cell, under laboratory conditions, taken from an embryo to check for genetic disease.

Polycystic Ovarian Syndrome An endocrine disorder that may affect hormonal balance, menstruation/ovulation and the structure and function of the ovaries.

PMT Premenstrual Tension. These are symptoms arising from hormonal changes, normally occurring a week before menstrual bleed. They can include irritability, tearfulness and mood swings.

Premature Ovarian Failure The ovaries are no longer producing follicles and ovulation is not happening at a younger age than when the menopuase would ormally occur. It is indicated by an elevated FSH level and an absence of periods.

Progesterone A female hormone secreted by the corpus luteum in the ovaries during the second half of a woman’s cycle. It causes the lining of the uterus to become secretory in preparation for the implantation of a fertilised egg.

Semen The fluid that is ejaculated by the male. Normally this would contain millions of sperm in seminal fluid.

Seminiferous Tubules Sperm is developed and grows in the tubules.

Sperm The gamete that contains the genetic material of the male.

Sperm Count One of the parameter’s that is checked in a semen sample i.e. the number of sperm present in a given volume of semen.

Sperm Donation Donation of sperm, from another male, to help couples conceive.

Sperm DNA Fragmentation Sperm DNA fragmentation is a term used to denote broken strands of DNA within sperm, which in turn may lead to male subfertility, IVF failure and miscarriage. Often caused by oxidative stress. This is not routinely tested for in normal sperm analysis

Spermatogenesis The development and production of sperm.

Sperm Motility Another parameter that it checked in the semen sample. It is the ability of the sperm to swim in a straight line. This is important in getting to the egg to enable fertilisation to occur.

Surrogacy A woman who is not the biological (genetic) mother carries a pregnancy on behalf of another woman/couple.

Teratazoospermia A high proportion of abnormal sperm in the ejaculate.

Testes The male sex organs where sperm is manufactured.

Testosterone This hormone is responsible for most male secondary sexual characteristics and aids the production of sperm. It is also found in smaller quantities in women.

Vagina The birth canal leading to the uterus

Vaginal Ultrasound Internal vaginal ultrasound scan enables clear imaging of the reproductive organs in a female. This is often used to assess follicular development during treatment.

Vas deferens Tubes which carry sperm from the epididymis to the ejaculatory ducts.

Vasectomy A surgical procedure which cuts the vas deferens, preventing the transport of sperm to render a man sterile as a means of contraception.

How to increase AMH levels 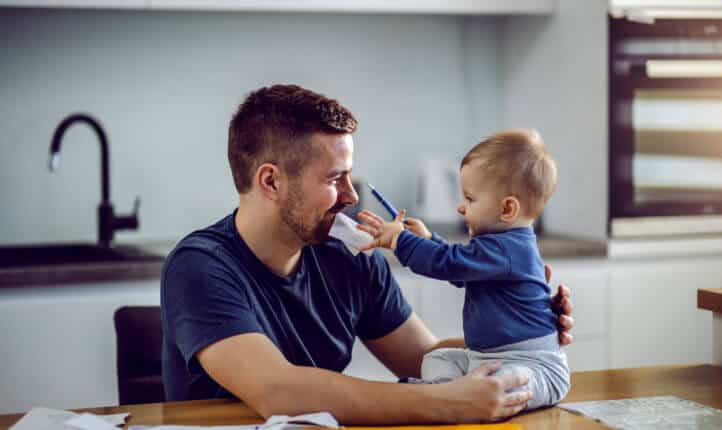 How to budget before having children